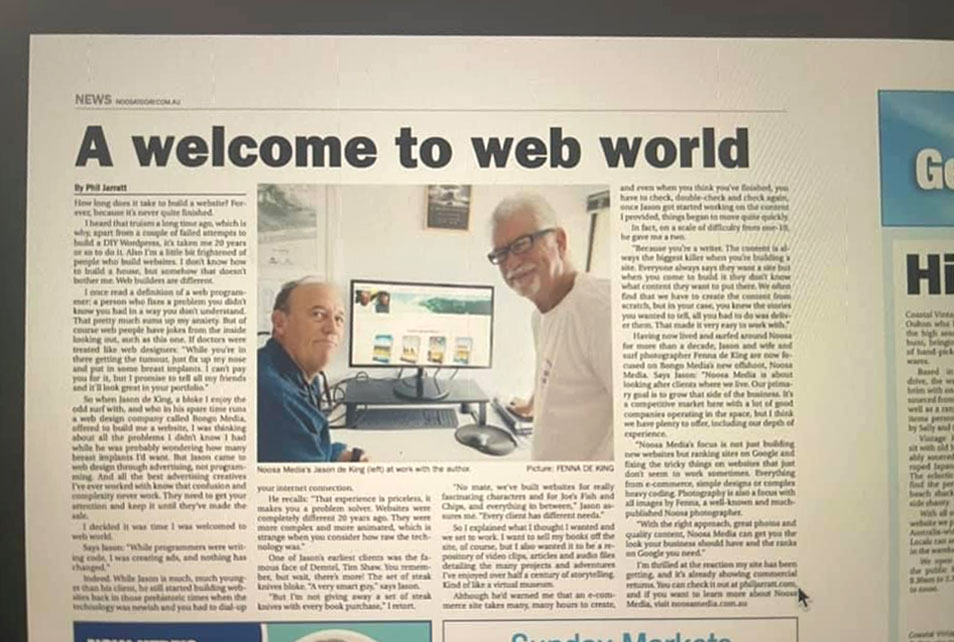 Article in the Noosa Today Newspaper

A welcome to web world

How long does it take to build a website? Forever, because it’s never quite finished.

I heard that truism a long time ago, which is why, apart from a couple of failed attempts to build a DIY Wordpress, it’s taken me 20 years or so to do it. Also I’m a little bit frightened of people who build websites. I don’t know how to build a house, but somehow that doesn’t bother me. Web builders are different.I once read a definition of a web programmer: a person who fixes a problem you didn’t know you had in a way you don’t understand. That pretty much sums up my anxiety.

But of course web people have jokes from the inside looking out, such as this one. If doctors were treated like web designers: “While you’re in there getting the tumour, just fix up my nose and put in some breast implants. I can’t pay you for it, but I promise to tell all my friends and it’ll look great in your portfolio.” So when Jason de King, a bloke I enjoy the odd surf with, and who in his spare time runs a web design company called Bongo Media, offered to build me a website, I was thinking about all the problems I didn’t know I had while he was probably wondering how many breast implants I’d want. But Jason came to web design through advertising, not programming. And all the best advertising creatives I’ve ever worked with know that confusion and complexity never work. They need to get your attention and keep it until they’ve made the sale. I decided it was time I was welcomed to web world.

Says Jason: “While programmers were writing code I was creating ads, and nothing has changed.” Indeed. While Jason is much, much younger than his client, he still started building websites back in those prehistoric times when the technology was newish and you had to dial-up your Internet connection. He recalls: “That experience is priceless, it makes you a problem solver. Websites were completely different 20 years ago. They were more complex and more animated, which is strange when you consider how raw the technology was.” One of Jason’s earliest clients was the famous face of Demtel, Tim Shaw. You remember, but wait, there’s more! The set of steak knives bloke. “A very smart guy,” says Jason. “But I’m not giving away a set of steak knives with every book purchase,” I retort.
“No mate, we’ve built websites for really fascinating characters and for Joe’s Fish and Chips, and everything in between,” Jason assures me. “Every client has different needs.”

So I explained what I thought I wanted and we set to work. I want to sell my books off the site, of course, but I also wanted it to be a repository of video clips, articles and audio files detailing the many projects and adventures I’ve enjoyed over half a century of storytelling. Kind of like a virtual museum. Although he’d warned me that an e-commerce site takes many, many hours to create, and even when you think you’ve finished, you have to check, double check and check again, once Jason got started working on the content I provided, things began to move quite quickly. In fact, on a scale of difficulty from 1-10, he gave me a 2. “Because you’re a writer. The content is always the biggest killer when you’re building a site. Everyone always says they want a site but when you come to build it they don’t know what content they want to put there. We often find that we have to create the content from scratch, but in your case, you knew the stories you wanted to tell, all you had to do was deliver them. That made it very easy to work with.” Having now lived and surfed around Noosa for more than a decade, Jason and wife and surf photographer Fenna de King are now focused on Bongo Media’s new offshoot, Noosa Media. Says Jason: “Noosa Media is about looking after clients where we live. Our primary goal is to grow that side of the business. It’s a competitive market here with a lot of good companies operating in the space, but I think we have plenty to offer, including our depth of experience. “Noosa Media's focus is not just building new websites but ranking sites on Google and fixing the tricky things on websites that just don't seem to work sometimes. Everything from e-commerce, simple designs or complex heavy coding. Photography is also a focus with all images by Fenna, a well-known and much-published Noosa photographer. “With the right approach, great photos and quality content, Noosa Media can get you the look your business should have and the ranks on Google you need.”

I’m thrilled at the reaction my site has been getting, and it’s already showing commercial returns. You can check it out at philjarratt.com, and if you want to learn more about Noosa Media, visit noosamedia.com.au

For a solution for your web design or SEO needs contact us at Noosa Media today. We can fix it!

Simply enter your details below and we will give you a quick call or book a chat to see how your website can be better.

No obligation, No strings, Just fixes.